Nationality : A candidate must be unmarried male and must be :


How to join Indian Army, Airforce or Navy as an officer after class 12 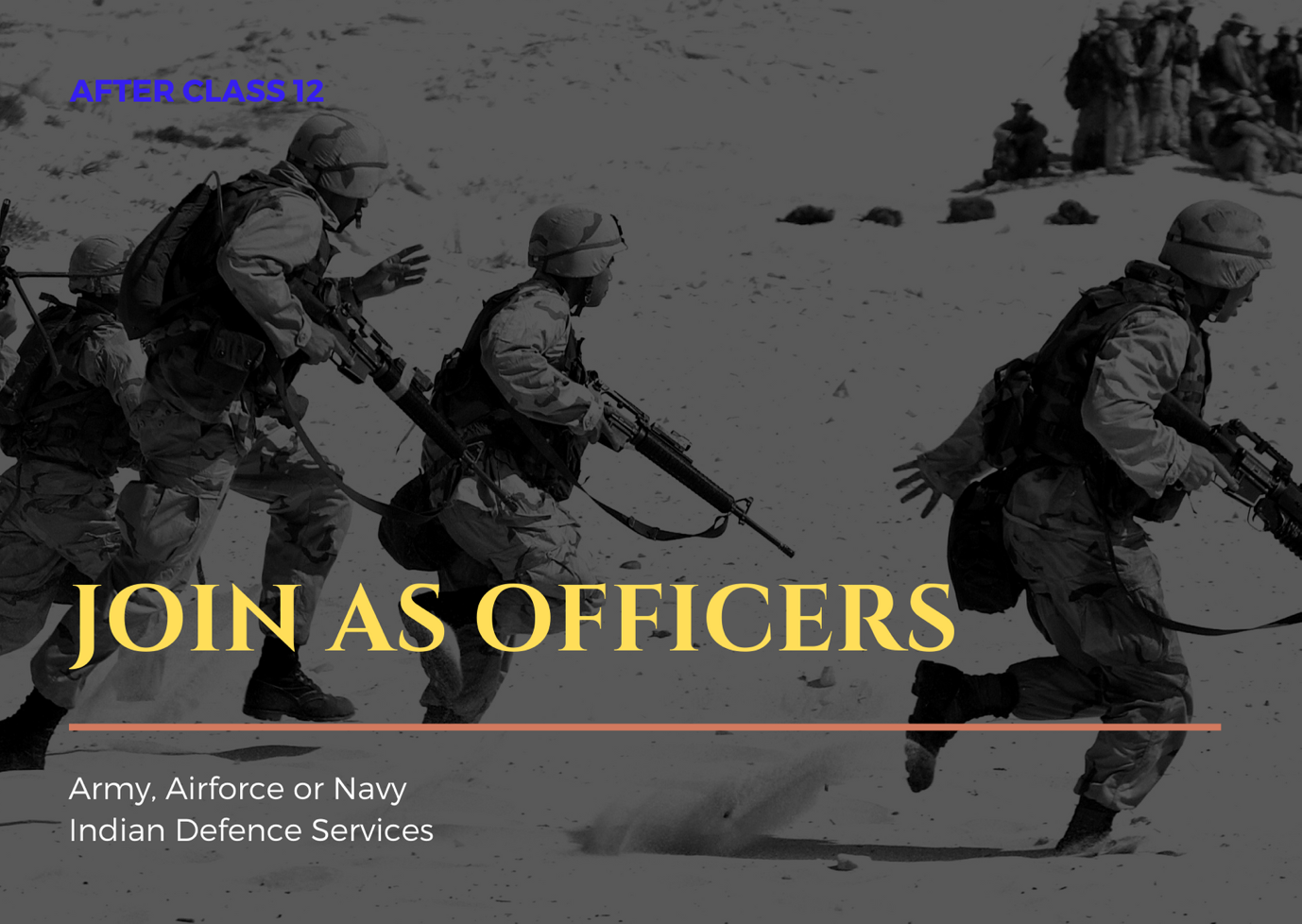 Join Indian Army, Airforce or Navy as an officer after Class 12th

NDA or National Defence Academy provides education and training to students for joining Army, Airforce or Navy as officers. NA/INA or Indian Naval Academy is for those students, who want to join Navy right from word go after class 12. Thus both NDA and NA provides training to students to become officers in Indian Navy. For admission to Army and Airforce, one has to join NDA for first three years. NDA is located at Khadakwasla, Pune and Indian Naval Acadmy is located at Ezhimala, Kerala.

Number of seats at NDA, Pune

A total of 370 cadets will accepted to the academy in this semester. Thus the total number cadets inducted at NDA are around 740 each year.

Number of seats at INA, Ezhimala
45 seats are allocated to join Indian Naval Academy as 10 + 2 Cadet Entry Scheme. By that count almost 90 candidates are accommodated at INA each year.

Duration of Course at NDA:

It is a 3 years training and at the end of three years, the cadet is awarded an undergraduate degree in BSc or BA affiliated with Jawaharlal Nehru University (JNU), New Delhi, and fully supported and supervised by the All India Council for Technical Education (AICTE).

After 3 years, army cadets are allocated to Indian Military Academy, Dehradun for a year, after which they pass out as Indian Army Officers.

After graduation from NDA after three years, Air Force cadets are send to Air Force Academy (AFA) at Dundigal, Hyderabad for a three semester course before passing out as Indian Air Force Pilots.

Naval cadets, after completing three years at NDA go to Indian Naval Academy at Ezhimala in Kerala. It’s a one year course before they pass out as Indian Navy Officers.

Duration of Course at INA

This course is only for those aspirants who want to join Navy after class 12. According to the choice and merit, students opting for navy will get allocated to INA or NDA for naval training after clearing the UPSC NDA & NA entrance exam successfully.

The Indian Naval Academy inducts two batches each year at a difference of six months. Final passing out for INA graduates is after 4 years. They all get a B.Tech degree after 4 years of training.

Navy cadets from NDA, who join INA for their fourth year of training join the MSc (Applied Electronics and Communications) course, which is of one year duration before they pass out as Indian Navy Officers.

Education qualifications for Airforce at NDA
Candidates must have passed 10+2 or equivalent exam with physics and mathematics subjects.

NDA applicants have to pass the written exam conducted by the UPSC, followed by extensive interviews by the Service Selection Board (SSB). These interview cover candidates skills in general aptitude, psychological testing, team skills as well as physical and social skills, along with medical tests. Applicants for Air Force go through a test called Computerized Pilot Selection System or CPSS for short.

Once Selected, a merit list is published and students join NDA or INA.

1.    A candidate has to specify one order of preferences to join Army, Airforce or Navy in the Online Application Form.
2.    Candidates will be considered for appointment to those services only for which they express their preferences.
3.    No  request  for  addition/alteration  in  the  preferences  already indicated by a candidate in his application will be entertained.

Thus there are lot of opportunities for students to join Indian Defence Services as officers after class 12. As the entrance exam is held twice a year, one will have to keep a vigil on the UPSC or mynextexam sites to know about the time of filling up of applications. The joining to the courses is in January or July each year. Read More...